baby's day at the beach — spoonflower

My new collection of fabric, Baby's Day at the Beach, is now for sale on Spoonflower!

The Baby Sandcastles print features a pencil sketch of my bebe playing in the sand (although in real life, he smashes castles faster than I can build them for him!): 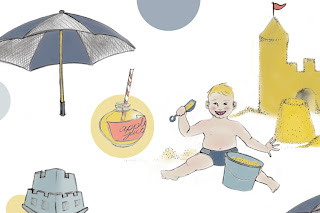 I included five colors of this umbrella print (my favorite); honeysuckle, quarry, teal, sand, and storm: 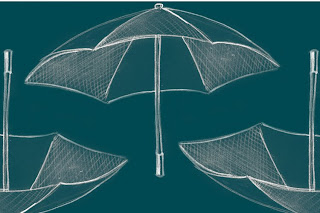 and an all-over print of this apple juice bottle (my husband's favorite!): 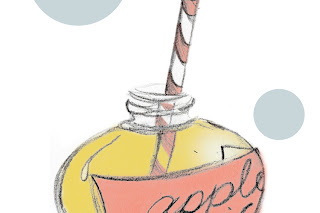 I'm considering adding a different colorway, and maybe including a print that features this little hermit crab, who didn't make it into my final design: 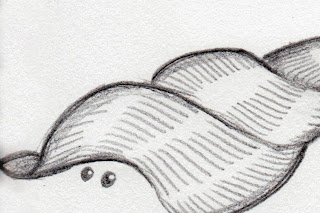 These images are copyright protected, like everything on this blog. Please ask before using them!

Posted by Night Garden Design at 8:21 PM No comments:

Call me crazy, but the Petersiks from the Young House Love blog made their paver patio look so easy that when it came time to make a little spot for the bebe's pirate sandboat to moor, I thought, "I can do that!" (Note: it's hard to tell how hard a project is by looking at photos on a blog.)

Initially, we'd planned to add just a little 5x8' paver patio addition, kind of off to the side of the cast concrete patio we put in about five years ago. After a little more thought about the logistics of digging it all up, compacting everything, and getting the new segment to line up seamlessly with the eventual total patio re-do (not to mention considering the possibility of renting a compacter and a paver saw multiple times), we decided to just do the whole thing all at once.

Sadly, my camera went missing for awhile, so I have no photographs of the prep work. You'll have to trust me that it was EPIC.

PREP STEPS:
* Pulling out the old cast concrete patio
* Piecing the old cast concrete bits together to widen the pathway from the backdoor to the patio
* Tearing up the sod
* Digging everything down to a depth of approximately 6 inches
* Trying to level the dug-out space (a fool's errand in a backyard that isn't level to begin with)
* Laying down weed barrier
* Shoveling, spreading, and compacting gravel
* Shoveling, spreading, and leveling sand

This list took the better part of two weeks during the bebe's nap time and in spare minutes when he felt like playing in his sandbox while his dad and I worked nearby.

I did get this photo of all of the rusty nails and screws I found while I was digging up the sod. These had likely been down there since the house was built in 1961. 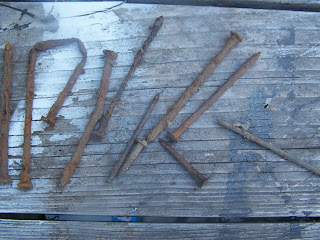 This next photo is what you get when a paver company accidentally sells your special order of pavers to another customer from Jerry's hardware store (mistaking the other customer for you), but promises that when a new pallet arrives, it won't happen again because your name is on the new pallet.

That's right. Instead of hubby's name, they wrote "Jerry's Customer" on the new pallet of pavers. (*Sigh*) 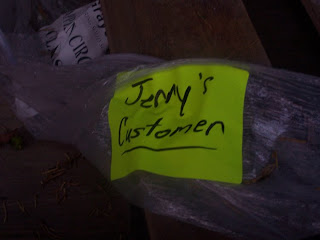 Now, this is where we veered sharply off course from the Young House Love blog. We started by laying a circle. 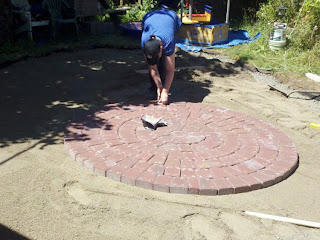 We made it bigger and bigger. 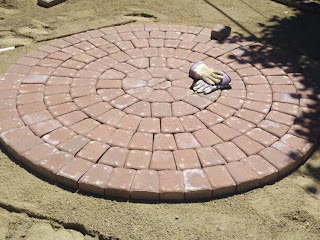 The "soldier row" was added around the perimeter of the full patio. 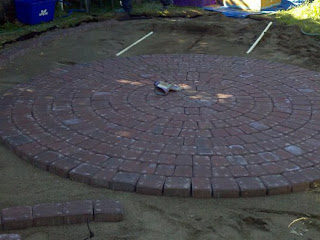 We nailed in the Snap-Tight border. A second circle was added, and all of the "pattern" bricks that didn't require cuts were laid in around the circles. 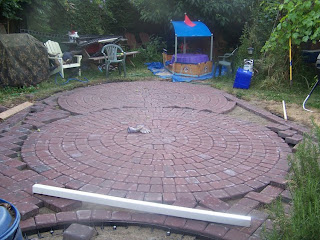 I measured and marked, and hubby made more than a hundred cuts on the paver saw in the course of one afternoon. I can't express enough how glad I am that we rented the paver saw. The rental cost $50, but the alternatives (chiseling them apart or using the tile saw to make shallow cuts on both side, then breaking) would have been really time consuming, and the edges would not have been so clean. 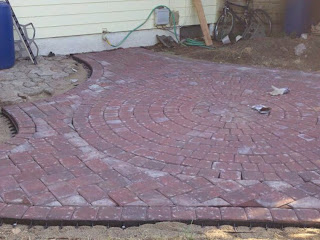 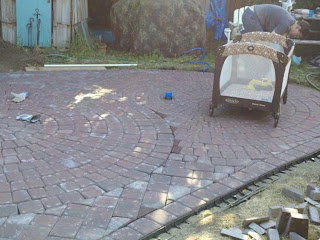 We compacted the pavers with a rented gasoline-powered plate compacter (another time-saving tool I wouldn't have wanted to tackle this project without, though we did make sure to use an old piece of carpet to keep the compacter from chipping the pavers), and added layers of polymeric sand (compacting between each layer), then misted, and voila!

Here are some close-ups of the finished pattern of pavers. As you might be able to tell, the sanding is a really important step. It disguises all the gaps and helps the patio look uniform and cohesive. 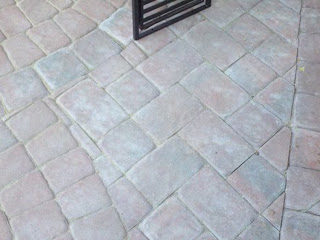 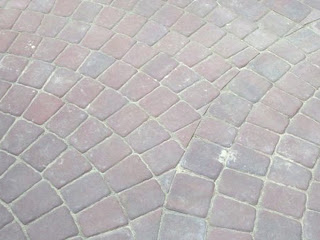 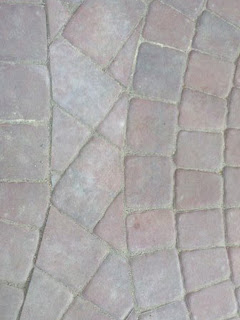 We're still working on adding a garden bed and making the path meet the edge of the patio, so there'll be a few more photos between now and "DONE"; in the meantime, here's a photo of me putting in the original cast concrete patio way back in 2006. 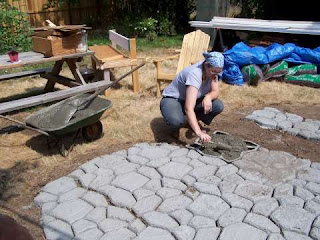 I'm determined to make this the last patio I put in for quite awhile, but as I remember, I swore the same oath the last time, and we all know how that turned out.

Posted by Night Garden Design at 8:31 PM No comments:

Happy Birthday to Me! 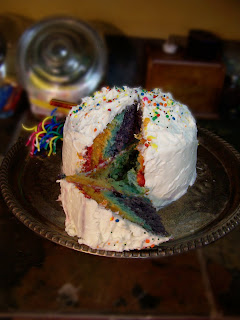 I saw a similar cake on Pinterest awhile back and wanted to replicate it, but the only recipe I found was pretty wild, including diet Sprite and diet pudding mix. Since I avoid artificial sweeteners when possible, I chose to go a more straight-forward route.

Pretty simple; mix up a box of white cake mix according to package instructions. Scoop out a cup or so, dye it red, add raspberries. Divide evenly and dollop in the center of two prepared pans. Scoop out another cup or so, dye it orange, add mandarin orange bits. Divide evenly and spoon on top of the two red dollops. Repeat for yellow and green, without fruit. Help mounded batter settle by striking the side of the pan with your hand.

Repeat for blue, indigo, and purple, mixed with blueberries. Once settled evenly in pan, bake in pre-heated oven. Cool, remove from pans, frost with confetti frosting. 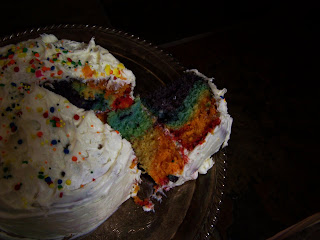 I want to try it with cupcakes next!

Posted by Night Garden Design at 12:59 PM No comments:

Young House Love's Pinterest Challenge was issued last week, and it was just the motivation I needed to get off my duff and get a project started! 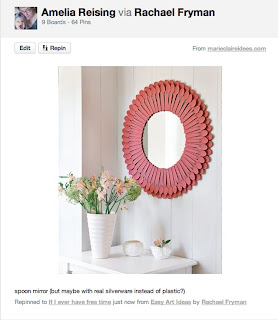 Pinned by a Pinterest user a few weeks back, from Marie Claire Idees (although I've since seen it on the Country Living website as well).

I nixed the plastic spoons, backed a small mirror with a galvanized pipe collar from the hardware store, and surrounded the mirror with silver-plated spoons and forks from the thrift store. 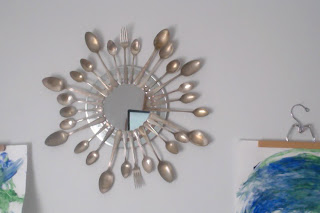 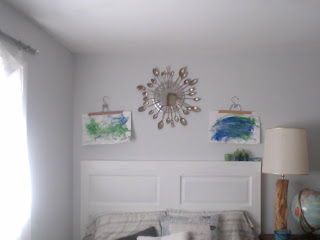 It doesn't really look anything like the original pin, but in a way, that's what I like most about it. I let the original materials inspire me to make something similar, but really different and completely my own.

If you want more specifics, leave me a comment or shoot me an e-mail, and I can walk you through the steps. If there's enough interest, I may just post a follow-up blog. Thanks for reading and looking!

Posted by Night Garden Design at 9:47 AM 7 comments: