"Wonderland" is underway, and I posted a couple of "Wanted" messages on Eugene FreeRecycle and Lane County Pay-It-Forward asking for bits of stuff people might have laying around that could be used for costumes, set pieces, and props.

I get a little nervous whenever the word "vintage" is used to describe something. It means different things to different people. What it DOES cleary mean, when not followed by a date, is that you have no idea what might show up.

I asked her what decade they might belong to, and got a little excited when she replied that she wasn't sure, but that her mom had entered the work force in the 1940s, and that she remembered her mom wearing these well into her old age. 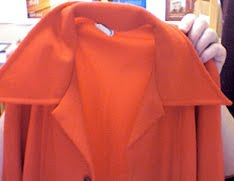 I got a whole sack full of 1970s, Sears brand, 100% polyester blazers with nice, wide lapels, like the red one shown here. I'm a creative person, but I'll admit, I'm having a hard time imagining how to squeeze these into a production of "Wonderland" set at the turn of the century . . .
Posted by Night Garden Design at 9:54 AM No comments:

Wonderland is coming this summer, and I've got the bebe to think about, but I'm still doing the production design for this one. And I have a budget of $300. That's community theater, folks!

Anyone have any spare:

*clothing (black shoes, suit jackets, ties, vests, shirts, long skirts, anything that can look or be altered to look turn-of-the-century)

*large pieces of masonite, cardboard, or foam core board (3x3 up to 4x8) for set pieces and props

*time to spare crafting all of this stuff between now and August?

I can even get you a tax receipt. That's how I roll.
Posted by Night Garden Design at 10:59 AM No comments: