new in my etsy vintage shop

I found a couple of really nifty treasures over the past couple of weeks. Namely, some really lovely mid-century dishware sort of fell into my lap while I was out thrifting for a pair of Converse for my husband. I had my Commando (phone) along to help with a bit of on-the-spot research, and so I came home with the lovelies below . . .

Broadhurst Ironstone by Kathie Winkle. Five pieces in this pattern, Viscount, are currently listed in my Etsy Vintage Shop, Night Garden Vintage. Kathie was a designer at Broadhurst for a few decades, and was one of the first designers to have her signature on the back of pieces she'd designed. Now sought-after by collectors, folks are gathering large collections of her machine-stamped, hand-painted pieces to mix and match. 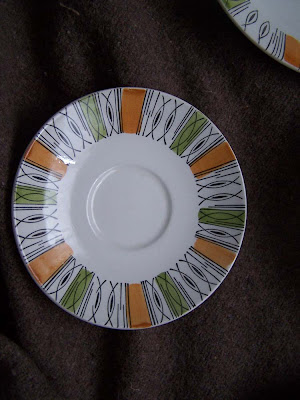 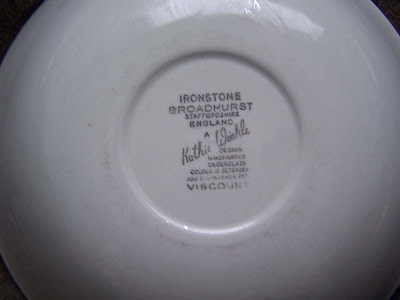 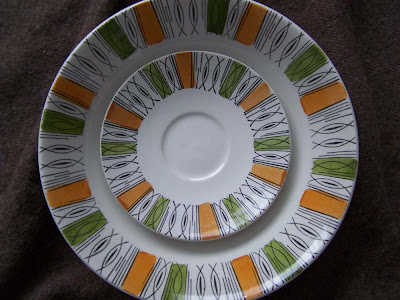 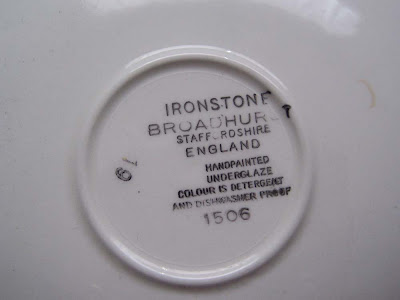 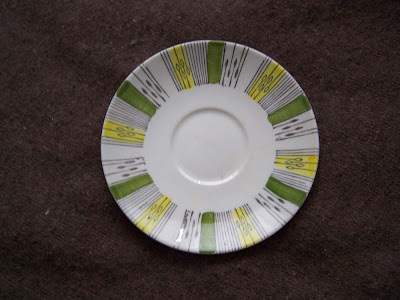 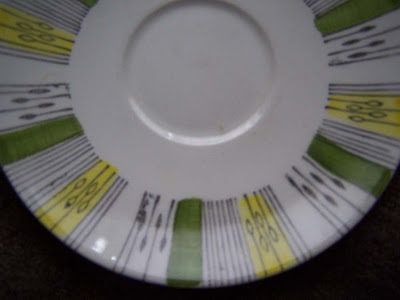 I have scoured the web to find more information about pattern 1506, but haven't found any other images of this pattern. The closest I've seen is Kathie Winkle's pattern "Safari". I've linked here to someone else's Flickr page.

As you can see from Louise's Flickr photo, the pattern is identical, but the color is different. Possibly "Safari" was available in more than one color-way? Possibly the plate is an early prototype? Possibly this colorway was simply known as "1506"? I don't know.

Next up, this serving plate by Stetson China Company for Mar-crest's Nest Stone line. The pattern name, according to website Modish.net, is Diamond Carousel, by designer Alfred Dube. The pattern is a ring of elongated diamonds and starbursts around the rim of the off-white dish, very retro-modern. 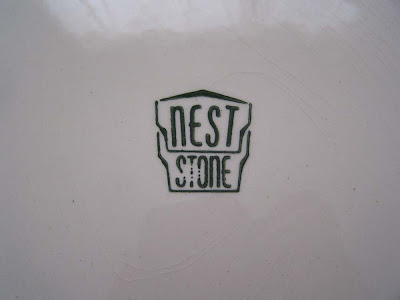 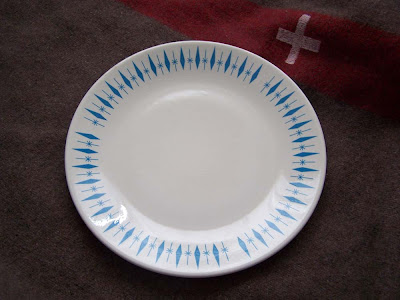 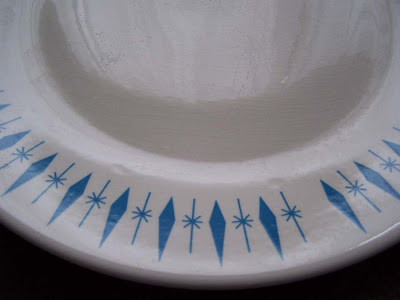 My assumption is that this is a serving piece; the only other plate in this pattern currently for sale on-line (as far as I've found) is listed as a dinner plate on eBay, with a 10-inch diameter. This is one and three-quarters inches larger.

Visit my Etsy shop to check out more photos and details! I have some pieces in Franciscan's Pomegranate pattern I'll be listing in the near future, so if you like that pattern, stay tuned!

Posted by Night Garden Design at 9:28 AM No comments:

"Hometown Tourist" is an occasional series in which I tell tales about our adventures around town, and actually, the whole state of Oregon. Take a peek and come exploring with us!

This past summer I had buckled the kiddo into the car one afternoon and gone off hunting for a nap. I picked a direction, then drove and drove . . . through a couple of towns . . . through scenic pastures full of sheep . . . for about half an hour, until I decided to turn around before I got lost, and ended up in the parking lot of The Harrisburg Area Museum.

Besides a room full of newer and antique tractors and farm equipment, the museum features several additional outbuildings full of local history and artifacts, as well as a tiny church and a tiny schoolhouse decorated with historical finds.

We didn't have much time to spend there the first time we discovered the museum (we'd arrived a half hour before closing time), but we've been back a handful of times since then and spent a bunch of time exploring. The kid is totally into the museum for the farm equipment; nothing quite like massive tractor wheels and exposed engines for this guy. I'm kinda into the handcrafts, like these huge button samplers . . . 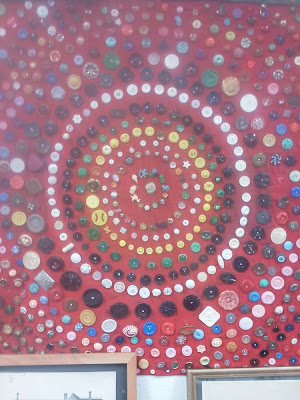 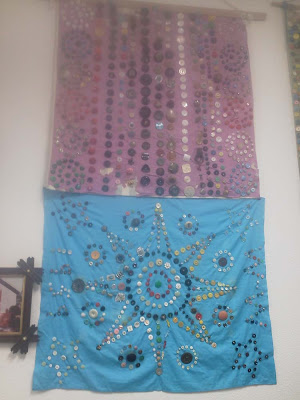 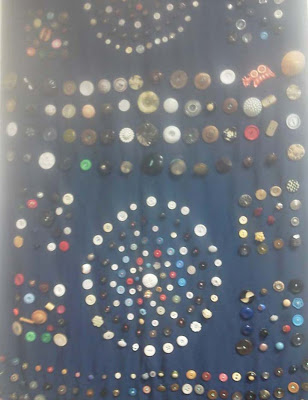 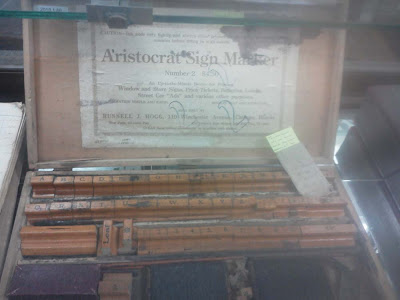 and these nifty scale models of buildings designed and built in a local woodworker's garage as a hobby. 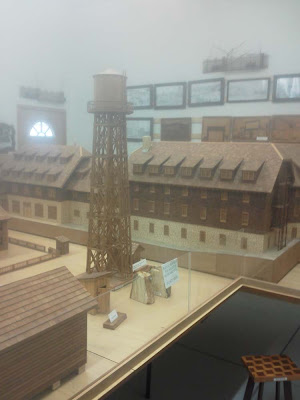 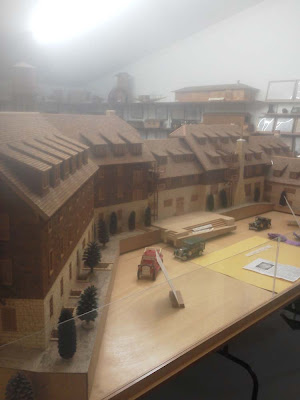 (Please excuse the foggy photos; it was cold out on our most recent trip, and the lens kept fogging up . . . )

We really recommend it. And if you happen to be there during a slow period, museum curator Leethra will treat you to a guided tour upon request. That woman possesses an incredible wealth of knowledge and passion for local history. And she's really sweet to little kids, too.

Posted by Night Garden Design at 11:04 PM No comments:

I'm deep in party-planning mode right now for the little dude's 2nd birthday. The hubby has made a special party theme request; here's an Etsy Treasury dedicated to some great Zelda inspiration. 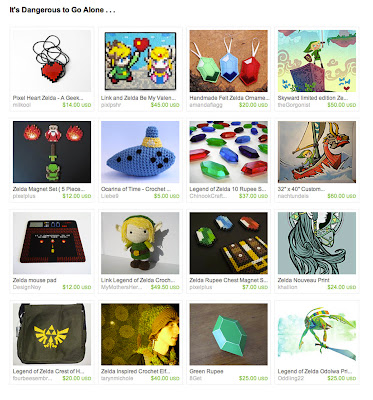 Posted by Night Garden Design at 12:07 AM No comments: 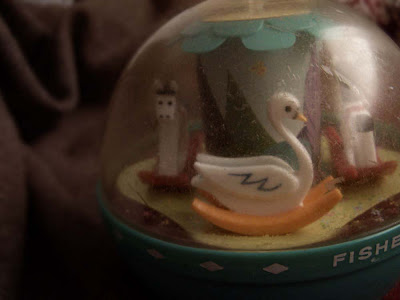 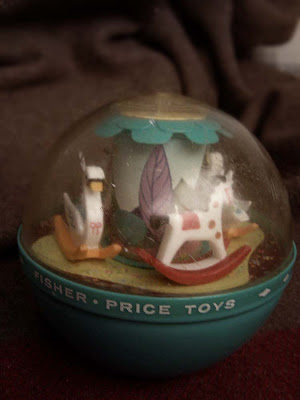 FOUND: vintage 1960s Fisher-Price chime ball, just like the hand-me-down one we had as kids. The chimes, when it's floating in the tub during the kiddo's bath time, sound softly, reminding me of the chimes on our old front porch in hot, hot southern Oregon summer, barely moving in the hint of a breeze.

Purchased for $5 at the thrift store a couple of weeks ago; it still had the $2 garage sale tag on it too, a good reminder to hit more yard sales this spring.

Posted by Night Garden Design at 2:59 PM No comments:

Here's another use for bakery boxes, adapted from this idea for an ice cream sundae kit (originally pinned on Pinterest).

After giving it some thought, I came up with the idea of a Late Night Snack Kit. Look! Here's one now! 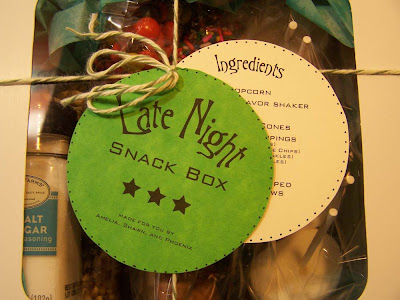 It still has the waffle cones and toppings for sweet cravings, plus popcorn and popcorn flavoring . . . and chocolate-covered GIGANTIC MARSHMALLOWS!

I made several kits this year for gifts, and they're a pretty cool gift option, whether or not you're trying to keep your holiday spending in check. For starters, it's:

#1: Useful. Everyone needs a late-night snack once in awhile, right? Or a mid-afternoon snack? Food is always useful.

#2: Doesn't depend too much on a person's aesthetic taste. Unlike a sweater, a framed print, or a Chia Pet.

#3: Doesn't add to a clutter problem, or require dusting. Because it's consumable and/or mostly recyclable, this is one gift that won't sit around indefinitely. At worst, the recipient can use it to fatten up some hungry non-migratory birds.


Start with some of the same bakery boxes used for this project. (Alternately, you can go to grocery store bakery and buy some cake or donut boxes. They might not be quite as cute, but the woman at the counter let me buy some for twenty-five cents apiece, so it's a budget-friendly option you can fall back on.)

In late September, I picked up two bags of gigantic Campfire marshmallows at an end-of-season clearance at the local grocery store. They don't sell these everywhere, and they don't sell them all year, but the expiration date on my bags is for February 2013, so I knew they'd keep fine through the holidays. Of course, if you're using this idea for birthday or hostess gifts throughout the year, you can always use regular-size marshmallows.

Put some semi-sweet chocolate in a double-boiler and melt it down, stirring till it's nice and smooth. Be careful not to get any water in it, not even a drop, or you'll ruin the batch (like I did the first time through)! Stick a jumbo mallow on a lollipop stick, dip the bottom in some chocolate, then into some sprinkles, then put it into a cupcake liner and let it cool until the chocolate sets. I put four jumbo marshmallows in each box; you might be able to fit six or eight regular-sized mallows depending on how much space your cupcake liners take up. 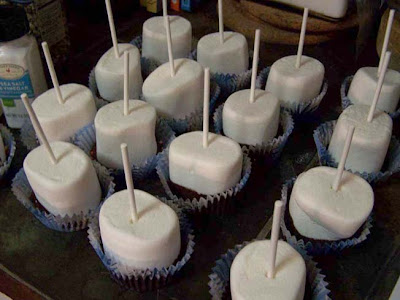 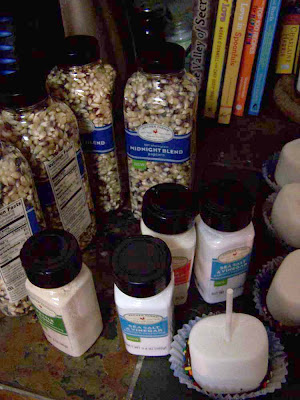 Tie up with baker's twine and pretty tags, and you have a fun Late Night Snack Kit! 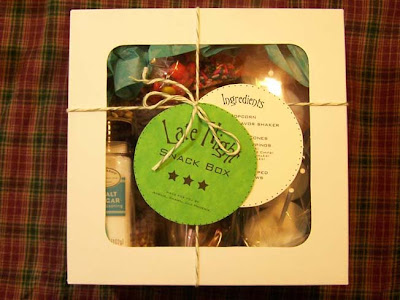 It breaks down to about $11 per gift for four. Of course, you'll have enough sprinkles, candy, and marshmallows for more people, so these gifts get less expensive per each if you make more.

Have fun with it! If you can think of other snacks you'd like to include, there's no reason why you shouldn't. I added boxes of tea to a a couple, and a salted caramel chocolate bar to one. Just remember to list the ingredients on the tag, and note that mallows (especially large ones) can present a choking hazard.

Posted by Night Garden Design at 11:26 PM No comments: