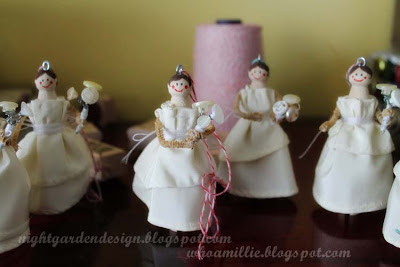 My paternal grandparents were married in the midwest in the early 1940s, as young college graduates. Grandma's dress was  long and made of ivory silk, and her smile glows and her eyes shine from happiness in the photos I've seen of that day. I think most days with my Grandpa, they probably shone just the same.

She was on the shorter side of our family tree, and birdlike in so many ways (I remember her laugh like birdsong, her light hands and their feathery movements). She was small enough that the seamstress overestimated the length of her gown, and several inches had to be trimmed from the hem. Several inches that she, a saver like me (only with more attic space), stashed away through fifty-six years of life after their wedding day, and which Grandpa, unawares, stashed away for an additional fourteen long years after her death.

And so the trimmings of Grandma's silk wedding gown lay undiscovered until, cleaning out some hidey space after Grandpa followed her into the unknown, my dad and his siblings found them again. The pieces must have been labeled, or they might not have recognized what they were. Or possibly Grandma stored the pieces with her dress, and my dad and aunts and uncles knew them on sight. Somehow it came from my dad to me, to split in some way between my sisters and I.

They came as two oddly shaped pieces, maybe five inches at the widest point and tapering, at the ends, to nothing. I imagine the nervous hands of the person making the alterations, wanting to get it just right in one try. This was someone's wedding dress, after all. No room for error.

Though long, the odd shape of the two pieces made it hard to decide how to use them. I sat on the project for another year, cut a piece to try to make a silk flower, and abandoned the project as too ugly to live.

Thrown off by my craft fail, I stashed the silk away for another six months before inspiration struck in the form of clothespin dolls. 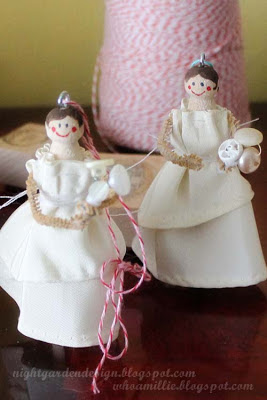 Grandma was crafty like me, too. Really, a number of us (aunts, sisters, cousins) share the affliction. For Grandma, it was mostly knit and crochet. An afghan for each grandchild was our birthright, and I remember very clearly a baby blue sweater she once made for me when I was a kindergartner. It was knit in a checkerboard weave pattern. I loved it. I have exactly one photograph of it. This one. (We were camping with some cousins, one of whom is, in this photo, regretting her offer to share her chair with her stocky five-year-old cousin with the bloody knee.) 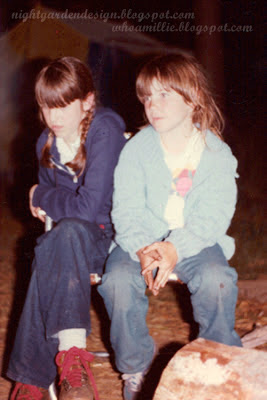 I have more photos of my Grandma and Grandpa than I have of this sweater, but not many. After marrying, my grandparents moved to Southern California where my Grandpa made a name for himself as an aerospace electrical engineer. Grandma raised five kids and managed a house using her degree in home economics, and she did a good job on every one. One of them (my dad) married and moved north to pursue a career as a a civil engineer. After that,  they saw him (and later, us) only once a year or so. I don't have as many photos or memories of them as my SoCal cousins do, and I didn't get as much time with them while I was growing up, but oh, there was so much love. We felt it from a distance of hundreds of miles.

I made the dolls first, carrying their bouquets of buttons from Grandma's button box. It came time to cut the silk for their dresses, and my hands weren't sure I meant them to do it. Seventy years that silk sat untouched. Seventy years since it had been cut from the hem of her wedding dress. Back then, the act of cutting this fabric had kept my grandma from tripping on her hem. Now? I was cutting into her dress again. Her wedding dress. There was no room for error. 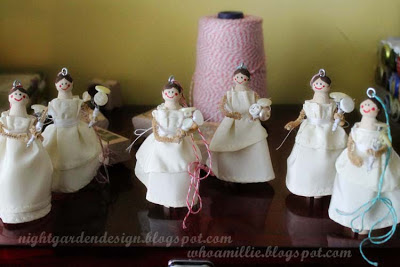 I kept my cuts as few as possible, sewing six little wedding dresses (two-layer tubes, really, cinched at the waist) from the remnants. I had painted the dolls' hair and eyes to match Grandma's on her wedding day: dark hair, blue eyes; and now, I dressed them one by one. 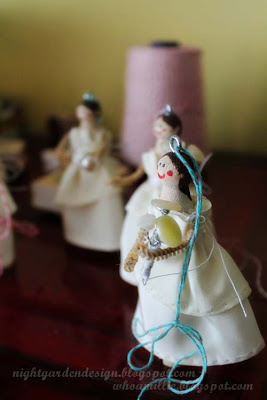 One of my step-sisters got married a month ago, and my younger sister will be getting hitched in a couple of weeks. It's all a cycle, you know. This has happened before, and it will happen again. Seventy years from now, some grandchild will be chopping up some memento of one or the other of them to make into something new. Just in time.

(p.s. you can make these photos larger by clicking on them.)

Linking up to:
I'm Crafty!
Posted by Night Garden Design at 9:53 PM 1 comment:

This turned out cute by accident. Somewhere around here is the basketball colored and textured vinyl remnant I intended to use for reupholstering this little 1970s caster stool.

I picked the stool up at a thrift store awhile back for a crafting competition, but never got a chance to use it for a project. 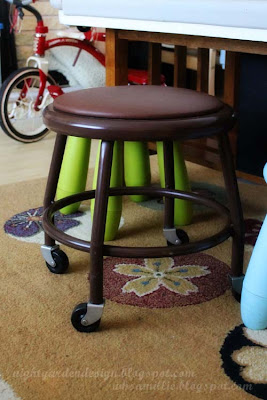 I meant to paint it, too, but I wanted to get the seat covered, first, to see what color might look best with the new upholstery. 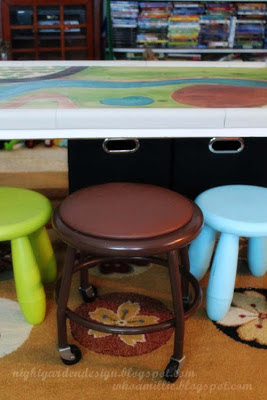 Four little screws held the pad on from beneath. A phillips head screwdriver took care of them in about two minutes. 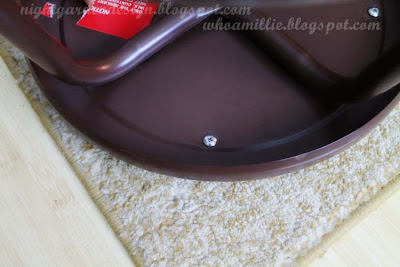 Here it is, plain brown without padding. 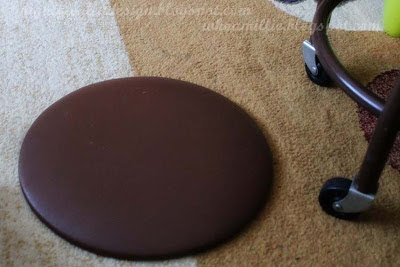 And here's the seedy underside, riddled with a hundred staples. 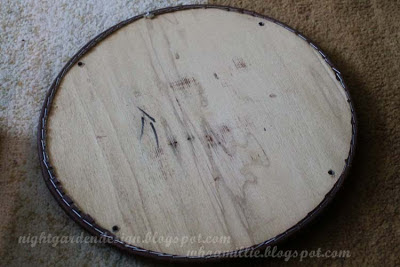 I searched my stash high and low for that basketball vinyl, but couldn't find it. What I found instead was a thrift store upholstery fabric remnant printed with modern leaf outlines in shades of green. And I thought, suddenly, that it would be a much better match to the two Ikea stools that will flank it at the train table.

I cut the fabric to cover, plus about an inch and a half "seam allowance" to wrap around and staple. 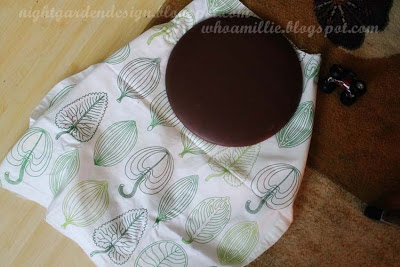 So modern! So graphic! So summery! So . . . who designed it and where did it come from? (Google image searches turn up nothing.) 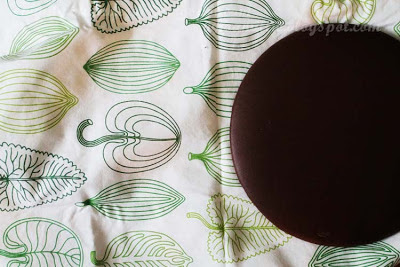 The secret to successful upholstery is to pull tightly, staple securely, and keep your curves smooth. I always start with a staple on one side (call it the west side), then pull the fabric taut and staple directly across from it (east side). Then repeat for the other two points on an imaginary compass rose (north and south). 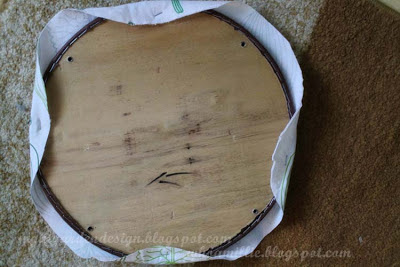 I keep at it, stapling opposite points all the way around, pulling tight, tight, tight along the curve for a smooth edge. I never need a hundred staples; I think I used maybe twenty for this stool. 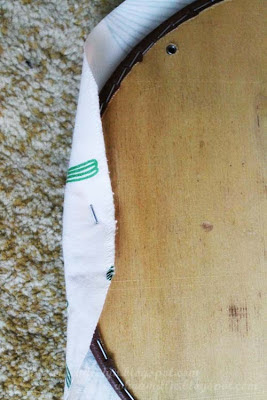 And here it is, finished. I could have painted the base white or some shade of green, but in the end,  it didn't need painting after all. The twiggy brown legs are pretty much the perfect complement to the leafy upholstery. My little Peter Pan loves it, and I imagine the Lost Boys would too. 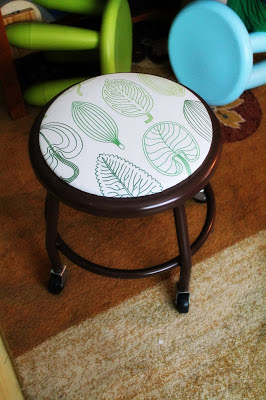 I find large, wooden quilting hoops at thrift stores all the time, and they're crazily inexpensive. I could have stretched any fabric in it to make some fun, fast wall art, but I chose to do another coffee sack project this time around. 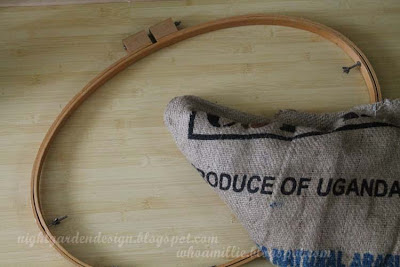 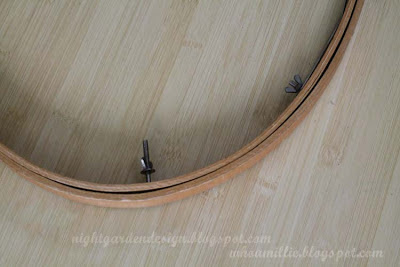 then chose what part of the design to display, and cut around my hoop with a 2—3 inch border added. 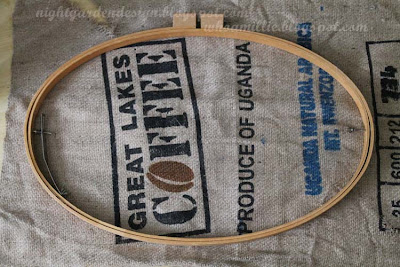 After cutting, I triple zig-zag stitched the edges of the coffee sack oval to keep the burlap from unraveling. 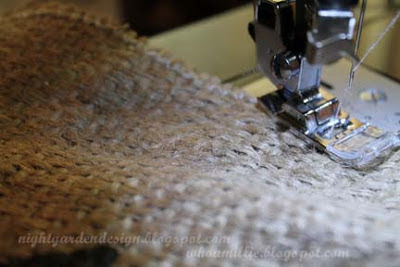 Then I stretched the edged circle over my hoop, and used a large nail to hang it on the wall. And there you have it! Fast and easy. You can use an iron on the steam setting to make the back lay down flat enough to hang on the wall, but some coffee sacks do fine if you skip that step.

As this project only uses the front of the sack, it's easy to find remnants large enough for other projects. Like maybe a cushion, a lampshade, some tassels, or the edging on a bike basket. You know; just for example. ;)

I have coffee sacks available in my Etsy supplies shop; drop in if you want to try one of these projects for yourself!

Linking up to:
The CSI Project
Posted by Night Garden Design at 1:24 PM 4 comments: