Hello again! We've been away on a bit of a cross country road trip, and so I haven't been around to update the ol' blog in a couple of weeks. June was a busy month anyway, and our trip (to my little sister's wedding, as mentioned in the last post of June) kinda took over my time/house/life for awhile.

You may know, if you've been reading awhile, that I do an occasional series here called "Hometown Tourist" in which I talk about our little adventures around Lane County and the whole state of Oregon.  I'm always game for a little adventure, especially if it can be found a short distance from my house, and we were lucky enough on this loooooong road trip to see parts of Oregon we haven't seen before on the way to and from our destination. 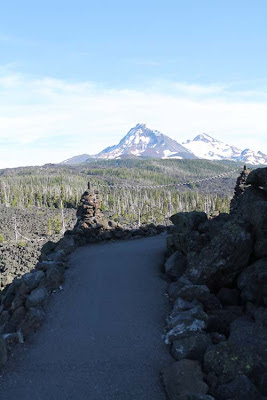 Enter the Dee Wright Observatory, at the top of the McKenzie/Santiam Pass between Springfield and Sisters, Oregon. 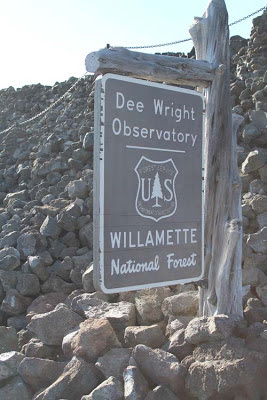 The McKenzie/Santiam Pass itself was clearly built by and for madmen who enjoy driving along narrow, mountainous roads with steep drop-offs, sometimes on both sides at once. (I took a large portion of it at 10-15 mph.) 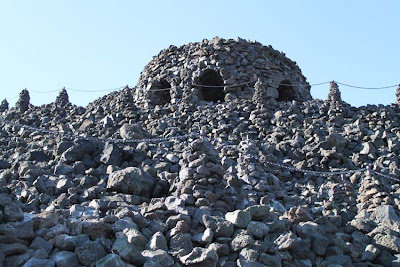 The staircase to the top is also built of lava rock. 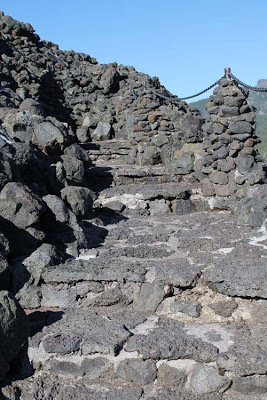 Who knew that past the deep green Oregon forests there's a huge lava rock field up there, the remnant of some extinct volcano? And who can picture settlers to the area trekking across it in 1860? I imagine someone's long-suffering spouse gritting teeth as yet another wagon wheel busted out on the rocks. "I told you we should go around!" that person may or may not have complained.

This plaque (inside the tower) might tell something of that story, but the lettering is time worn and I didn't have paper or crayons with me to make a rubbing. The wagon is a hint, though. 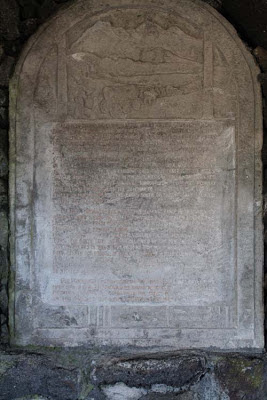 At the tippy top is a large (3 ft. diameter) cast brass disc with rays pointing towards Cascade Mountain peaks, craters, and other geographic features. I took this next photo for the Mister, who stayed at the car with the kiddo as I took the hike to the top. 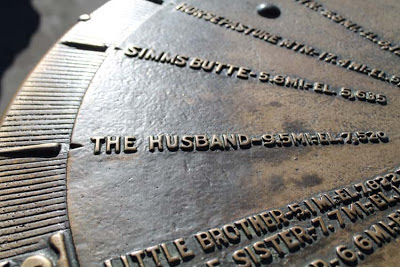 There he is down there in the parking lot, taking a photo of me at the top. Hellooooo down there! 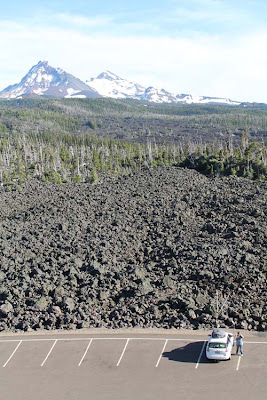 You can see for miles in any direction from up there. Miles and miles. And if the brass round at the top isn't clear enough, you can enter the tower where several notches left open in the lava rock walls give a clear view of one geographic feature each. This one shows Little Belknap Crater, a dormant shield volcano two miles distant. 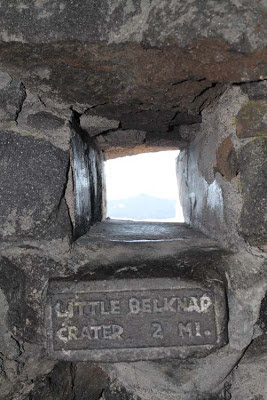 Here are the columns inside the tower. 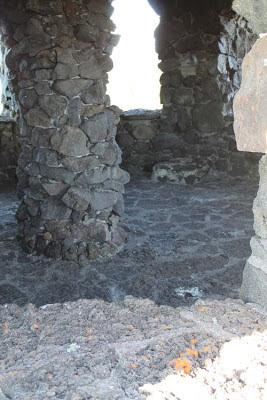 And one of the large windows. 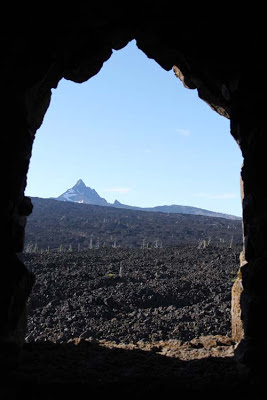 And finally, some foliage along the (scarily narrow, I promise you) road on the way down the pass. 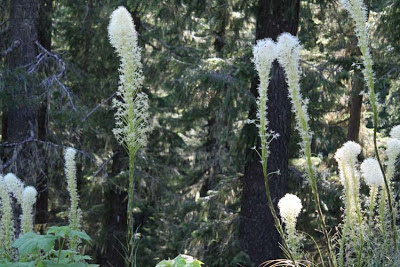 And there you have it: yet another Hometown Tourist adventure. If you choose to go see this marvel for yourself, travel in summer as the pass closes in the autumn and winter as snow makes it impassable. Also, vehicles beyond 35 feet in length aren't permitted to pass through, as hairpin turns along the way aren't possible for anything that long. Yikes. Can you imagine?

Thanks for reading! I'll have some Out-of-Town Tourist adventures to post sometime, too; we took in a few National Parks and Monuments along the way. Man, what a trip!