In which the blogger adds a glut of photos never-before-shared from the Roving Park Players production of Alice in Wonderland, summer 2010.

I wish I had taken more photos of a bunch of this stuff; in the time crunch leading up to the production, I didn't pause often enough to take photos of completed projects. I'm regretting it now, because some of the props and costumes really did turn out beautifully. Also, it's my policy not to publish photos of other people's children to the blog without permission, and since most of the cast was under age 18, I can't currently show many photos of finished costumes. Here's a link, though, to the Roving Park Players website, where you can see a few more photos of some of the costumes and props we all made, including a turtle shell from a garbage can lid, several nifty pairs of animal ears, the Queen of Hearts' laboriously constructed beauty of a dress, and Alice's dress, stitched from a button down shirt and some white muslin by Stacie W (who actually did a whole lot of really nice sewing on several of the kids' costumes).

Here we have wo different horse heads I made of foam, spray paint, faux fur and plastic animal eyes. These were worn on top of the girls' heads like hats. The foam, purchased in sheet form, has one side with a smooth "skin" on it, which is the side I spray painted. 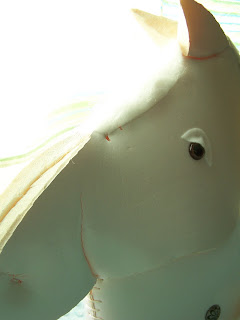 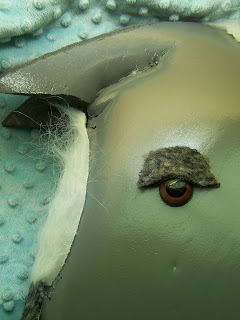 This next set are images of the Queen of Hearts' deck of cards tabbards. I cut a large stencil from waterproof poster board for the card backs, based on a drawing of the red queen from the original publication of Alice. I applied the stencil to some plain painters' canvas (drop cloths = cheap!) using red spray paint. The fronts are hand-appliqued felt that Lisa S-B painstakingly stitched onto separate sheets of canvas. 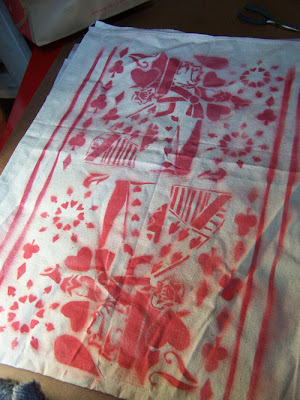 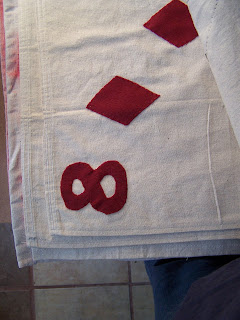 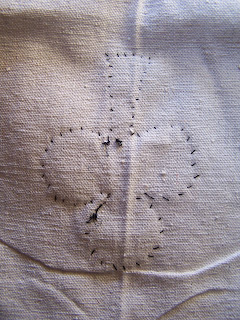 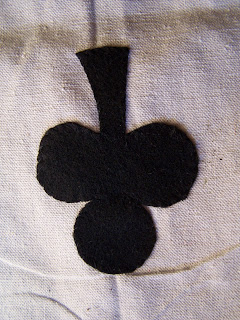 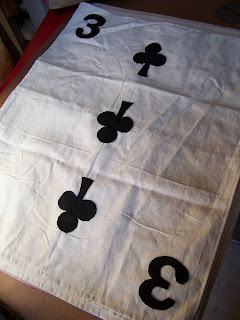 The tree in the garden was portrayed by an actor in brown clothing. His canopy is something I made from an old umbrella. Using several shades and coats of spray, I stenciled several different kinds of real leaves onto the umbrella to make an easy-to-transport tree canopy. 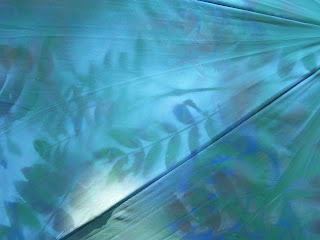 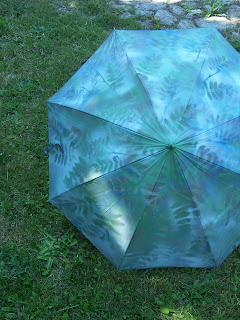 These next shots show two pocket watches (one for the Mad Hatter, and one for the White Rabbit) in the early stages. These are Trader Joe's chocolate tins with little plastic windows (still taped off, in these photos). I drilled holes and attached hook-eyes for chain attachment, then spray painted the tins using a hammered metal and antique bronze spray. You can see what a nice texture the hammered metal gives the watches, while nicely hiding text, scratches, and dents. I later filled the tins with all sorts of gears and watch hands and charms, and attached them with some simple hardware chain. 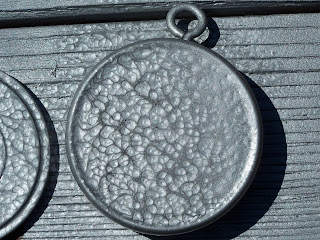 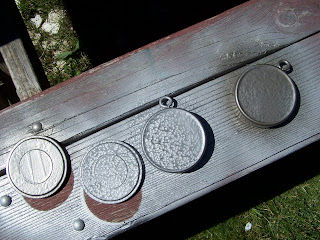 You can see here, across the Mad Hatter's vest near the bottom, the chain of his watch. The coat is the same one I made for Captain Hook in the previous season's production of Peter Pan (and it was used this past summer as the Wizard's coat in The Wizard of Oz. I can't wait to see where it turns up next!). 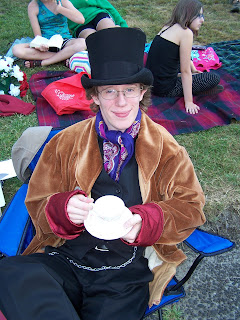 This is a first sketch of Frog's outfit. The pants ended up being made from a striped thrift store sheet, and the actress portraying the frog stitched up her own vest from some other sheet fabric leftover from the Caterpillar's coat. Oh Rosalie! I wish I had a photo of you in your wonderful costume! 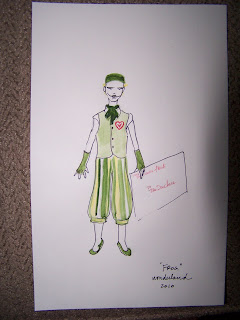 Caterpillar's fez, made of a buckram base I stitched together, then handed off to Lisa S-B, who did an amazing job covering it in felt and trim. 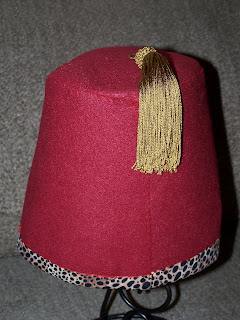 Caterpillar's coat, which the actor really liked. The volunteer who stitched this together for him, Miss Phoebe, hadn't previously tackled such a complicated pattern. I was SO PROUD though, of the way she stuck with it and eventually finished it. It turned out so beautifully, and really does credit to the character of the Caterpillar. 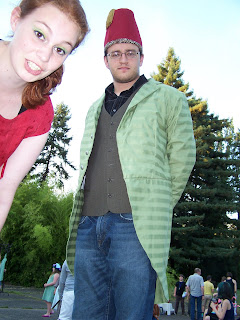 The actress to the left there is not Phoebe; it's actually the beautiful and talented Misty, trying on her costume for the Red Queen. Here's a better shot of her costume during a performance. The dress is one I thrifted, with a skirt I altered to Misty's preference. I also added a sash at the waist and a scarf/capelet thing to the back. Her felt hat was commissioned by the director from an artist whose name I'm afraid I don't know.

Here we have the wire frame for the Queen of Hearts' crown. I made it from twisted floral wire . . . 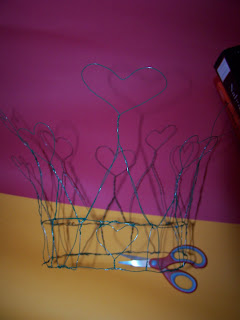 . . . then covered the wire with one layer of white, then several layers of red and yellow tissue paper soaked in Elmer's glue. 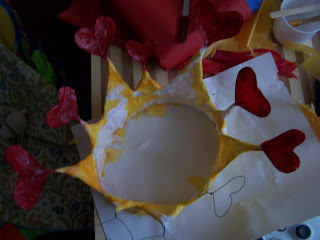 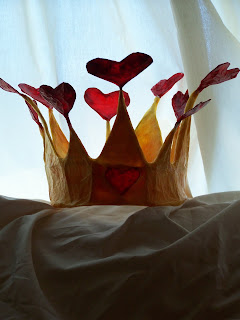 The result is an inexpensive (under $2) lightweight crown that catches light beautifully, though it may be considered a bit fragile for normal wear-and-tear. I admit I was led more by aesthetic and budget than practicality on this project; though it lasted the length of the show's run, the heart ornaments at the top required careful handling. Overworked wire has a tendency to break. 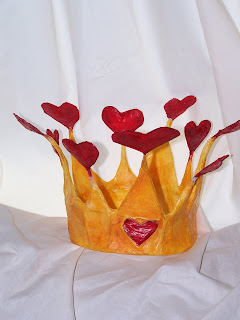 I think I might have shown these before; Phoebe made several pairs of ears for this production from a tutorial over at Threadbanger, and some furry felt (awesomely useful stuff we also used for the animal mitts and various other projects) These ears belonged to the March Hare. 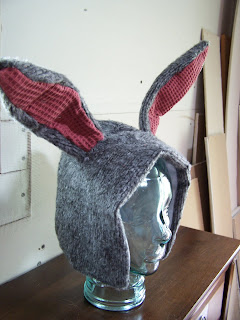 And one of the Tweedle's hats, hand appliqued by Lisa. I loved the way these looked with the boys' striped shirts onstage. 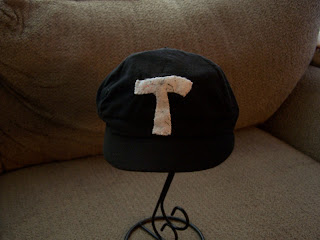 Again, I'm so wishing I had better photographs! Though I'm currently retired from the theater, if I were ever to work another show I'd certainly take more photographs of everything.

Thanks again to the Volunteer Fabrication Department who helped put together a bunch of props and costumes. If you're the parent of one of the child actors from Alice and you'd be okay with me publishing a few photos from the production, please get in touch! And if you're a costumer or props person who'd like a little more info on how we fabricated some of this delightful stuff, I'd be more than happy to give you some info. Shoot me an e-mail or leave a comment below!

Posted by Night Garden Design at 1:00 AM