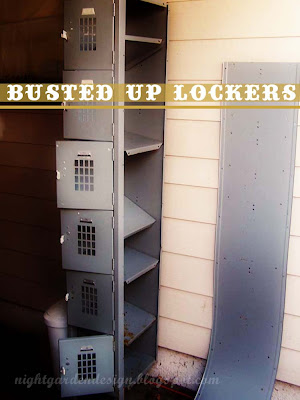 I bought this busted up locker set for $20 at Borders when they went out of business last summer. And then it sat in my carport for about seven months, through the fall and winter. Looking like this. 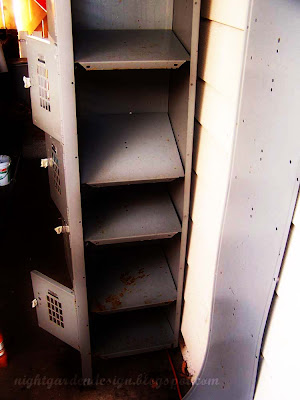 I have this problem a lot. I buy something because it won't be available anymore when I'm actually ready for it, and then I have to find a place to store it until I'm ready. In the case of these lockers, they were meant to take over storage duties for the changing table in my kiddo's room. But we were still using the changing table, and the lockers were busted and rusted and needed some serious TLC.

Finally spring came along, and it was (kind of) spray painting weather again! First, taping off all the elements that wouldn't get painted, including the number plates and the strikers. I used standard masking tape. 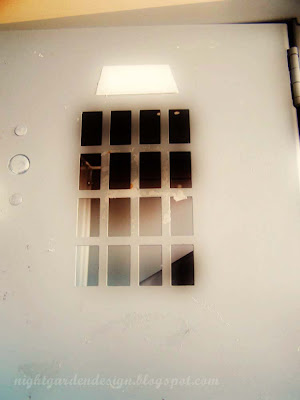 And I reattached all the shelves and the side panel. 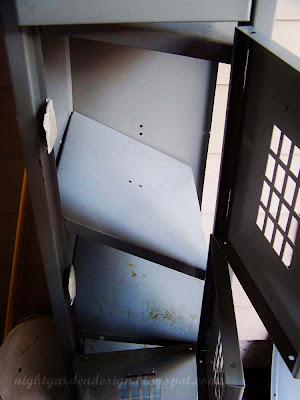 Next, I sanded down the rusty areas and applied some liquid de-glosser, then primed and spray painted the inside in sweet pea green. Over spray didn't matter at that point, because the outside would be painted over anyway. 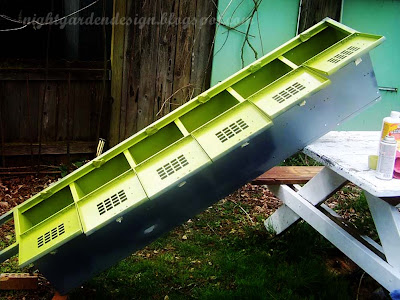 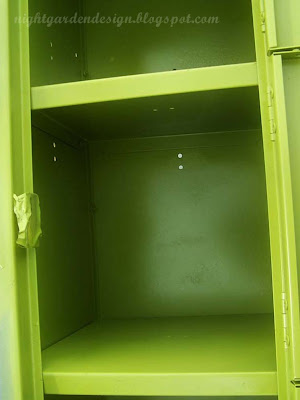 After letting the paint cure for a week, I taped off the inside of each locker window and spray primed and painted the outside in pool blue. 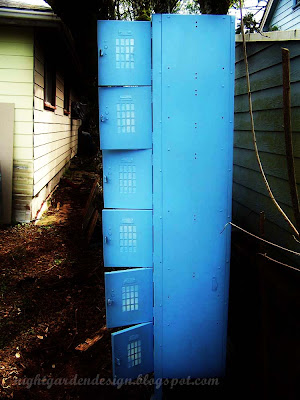 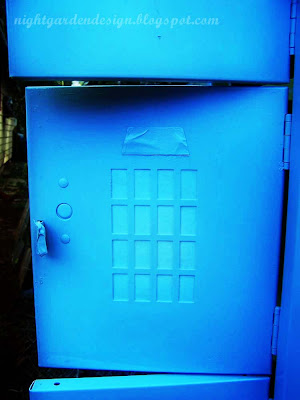 After I let it cure another week, I removed the tape . . . and it looked kinda awesome! 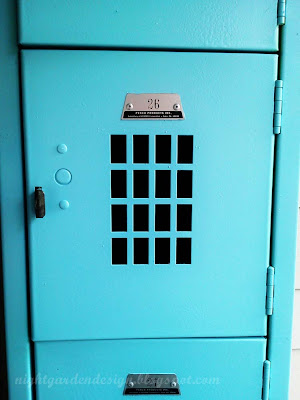 And then I had to let it cure outside quite awhile longer . . . like a couple of months longer.

At first, the cool spring temperatures refused to let the paint cure and harden correctly. I could still press into it with my fingernail after a couple more weeks. Later, we were still having trouble kicking our changing-table habit, although the kiddo's legs were hanging way over the edge and he was constantly kicking things on the floor.

Finally, last Friday, I dragged the old changing table outside, and after some crazed re-arranging, finally fit the lockers into their new home! 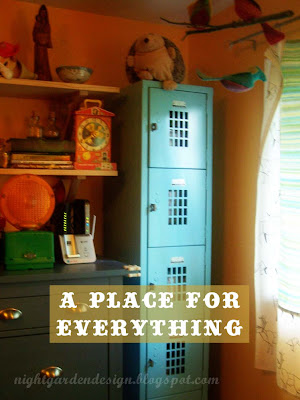 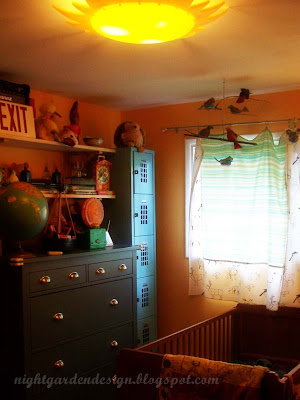 Tips for replicating this project:

* Layer up the spray paint in light, barely-there layers to avoid drips, runs, and scabby places that take forever to cure.

* Keep it out of your kiddo's room until it doesn't stink anymore. Spray paint takes a while to cure completely in cook humid weather, and until it does, it'll be stinky.

* Attach tall furniture to the wall so it doesn't get pulled over. 'Kay thanks.

I think these lockers are going to be around for a nice long time in the bebe's space. Unlike the changing table and the crib, it's not baby-specific, so I can see him getting use out of it well into his teenage years, though I imagine we'll have to paint it to match his favorite sports team, if he goes that route, or flat black if he turns out to be moody ("if". Ha!).

What about you? Have you been altering anything with spray paint recently? Let's see some links in the comments below. Thanks for reading!


p.s. you can make these photos larger just by clicking on them, but you probably already knew that.

Tip Me Tuesday at Tip Junkie

A Bowl Full of Lemons

Mommy by Day, Crafter by Night

The Stuff of Success

Oh what a brilliantly unique storage idea. This makes me want to hunt down metal lockers on e-bay! Often I think I am saved by impulse buys of heavy things by the fact I don't have a car. If I could drive nothing would hold me back!

Ok, this is A. Mazing. Seriously, you got this at the Borders closing sale for $20. I can't even believe the transformation here.