I found this $2 intercom speaker box at Bring a few weeks back while the kiddo and I were hunting down parts for an upcoming project. 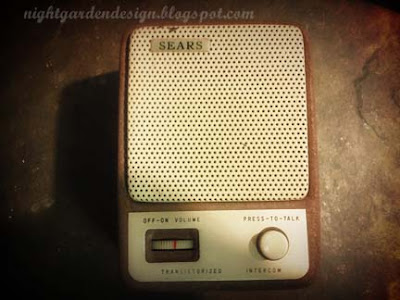 I challenged the Mister to find some way to turn it into an iPod speaker for the sake of our project, because though I knew I could probably muddle through and scare up some on-line diagrams and eventually research it into completion, he has years of practice building and repairing computers and I figured he could skip the research phase.

An hour later (maybe less?) he had removed the old guts, hunted down a scrap cord, and finished off the inside of the box so that my iPod wouldn't get scratched up. After that, it works like any other iPod speaker; just plug it in and turn on the music!

("Science is Real" by They Might Be Giants available for purchase on iTunes.)

I love that it sounds like an old a.m. transistor radio; just what I was hoping for. The iPod tucks up inside the back, the plate slips on to conceal it, and all done! I regret I don't have a step-by-step diy for you; the Mister was responsible for all but the idea, so I don't have any in-process photos.

Basically, he removed everything from the inside of the intercom box except for the speaker parts and the wires that attached them. Then he connected the ends of those wires to the wires + micro plug from a dead set of earbuds. After that, it's just a matter of plugging the iPod in to the speaker and turning it on! I tried to find a similar project on-line to link to, but this is the closest I came: an Instructable on making an iPod speaker from earbuds and some old computer speakers. Anything with a speaker in it probably works in a similar way. But admittedly, that assumption may be way off base.

Also: the knob and dial still turn, but they don't actually control anything. For the sake of our project, though, they'll lend that extra bit of detail that'll make it shine. Stay "tuned"! There'll be more about this in a couple of weeks. Until then, it's a total cliff-hanger.  Bwa-ha-ha!

Posted by Night Garden Design at 12:30 AM

I hope the video was working when you read this, ladies. It was broken when I checked in a minute ago, but should be working now. Thanks for your compliments!

I featured you this week! http://www.thevintagefarmhouse.com/2013/01/creative-things-thursday_10.html
♥

This is sooooo awesome! Thanks for sharing with us at Junkin Joe!!!! Hope to see you again soon...sending hugs from your newest followers!