thrift store finds: the ones that got away

Contrary to popular belief, I do not, in fact, take home every cool thing I find at thrift and re-sale stores. Sometimes I limit myself to just taking photos of things I like. So here's a little photo dump of some of the things I've loved and left.

This leather folding chair must've been one of the coolest chairs I've seen lately. I don't really need more chairs in my life (our house is still the same size it's always been), but the kiddo and I visited it about a half dozen times before someone else bought it off the sales floor and saved me from myself. 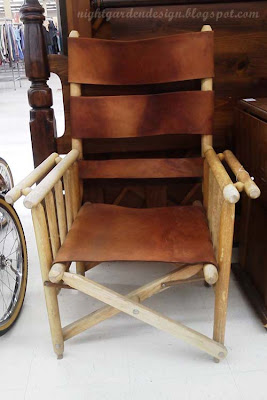 Big industrial mixer-thingy? Really cool looking. No use for it in the world. 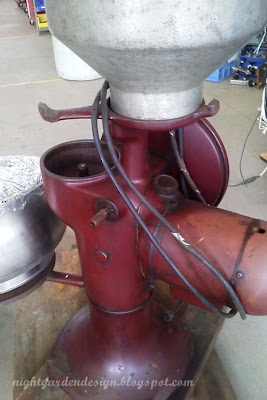 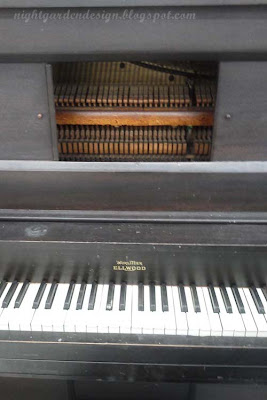 There was a whole set of these dictionary/encyclopedias one day at the Village; I loved the hand-marbled end papers, and if the books hadn't been so musty, large, pricey, and only sensical as a set, I might have trucked them home. Instead, I just photographed the paper, and just like that, I saved $150 and a ton of shelf space in my house. I might turn the pattern into a fabric design or something. 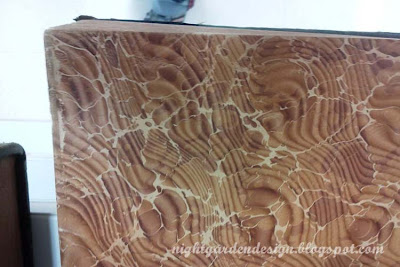 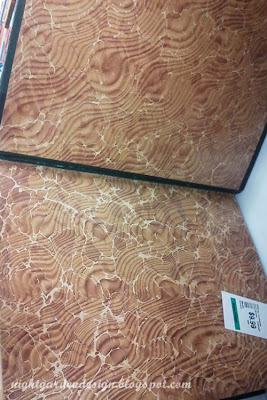 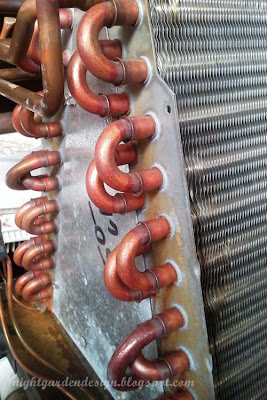 Modern Science Problems is a handsome book. I didn't get past the cover because it was super-musty smelling, and I don't like to introduce mustiness into my book collection. But the illustrations on the cover promised more inside. St. Vinnie's has such great book selections. 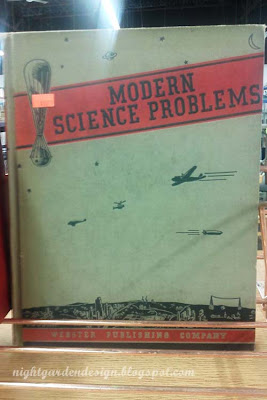 I like the idea of this 1970s kitchen measurements/equivalents chart (spotted at Goodwill), but the typography layout didn't do it for me, and I couldn't see past the glaring spelling error. It made me wonder if the measurements would be off, too. Still, I like the idea of a kitchen chart for measurements, and I hope to work up something similar in the near future. 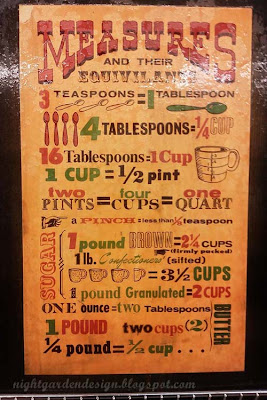 Inexplicably, this elf's house cookie jar (with a sign reading "Cookie Club" above the door) was in a summer window display at the Assistance League charity shop, along with wet suits, boogie boards, and sandcastle molds. 'Round these parts, the cookie club meets all year. Super cute cookie jar. Doesn't go with anything we own, except the gnome seatbelt covers I made for the kiddo's car seat. And we already have a cookie jar. 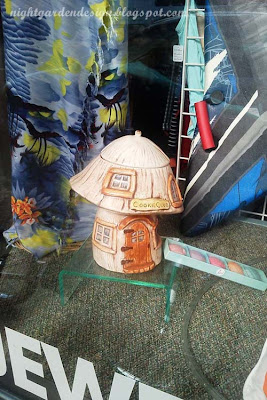 I thought these hand-stitched chair seats were pretty nifty, but again, we don't need chairs and again, they're not really our style, so I photographed them and moved on. Not five minutes later, the kiddo and I saw a couple of dudes rolling them past in a shopping cart, so they found a happy home almost immediately. 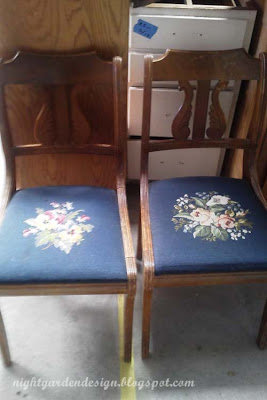 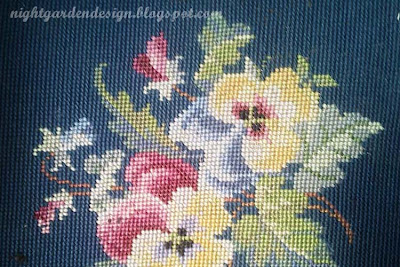 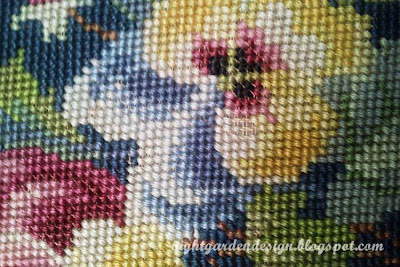 More chairs. I loved the super-tall backs on these and the old leather seats. I clearly have a chair problem. 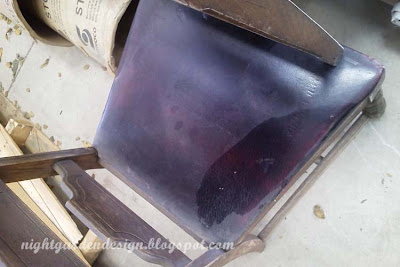 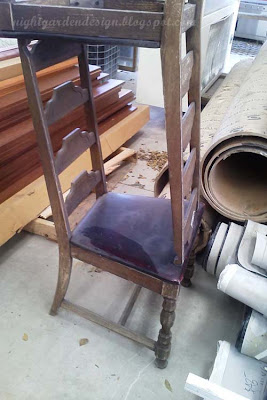 1950s nightstand in terrible shape. I liked the lines, though, and imagined it all refinished and shiny. I could be really beautiful. But the projects are piling up around here as it is. I mean, aside from the fact that there's no room in our bedroom for a nightstand. It's not the right time, little nightstand, but someday, maybe. Stay alive. I will find you. 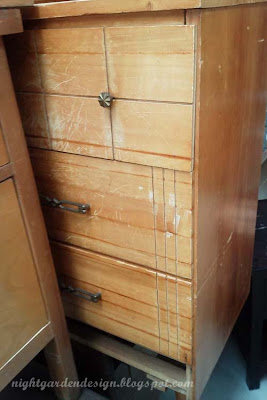 Metal cabinet with a fancy latch. No use for it, really, but that doesn't mean I didn't think it over. Flammable liquid storage, maybe? I don't know. Something. 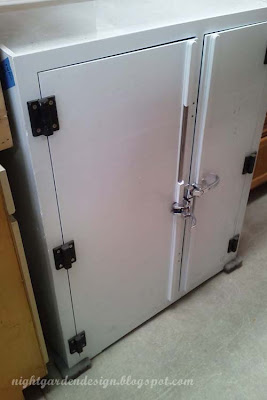 These pretty lucite boxes would make awesome art storage. I had all five of these piled into my cart one day at Bring, but they weren't priced, as far as I could tell. If you'll look closely at right-side hinge on the second case from the bottom, you might make out the number "10". As in $10 each. Because these are special, "lab-quality plastic" donated from the semi-conductor plant that closed. I have no lab use for these, so I can't justify $10 per box, but maybe someone else can! They had dozens of them in stock. 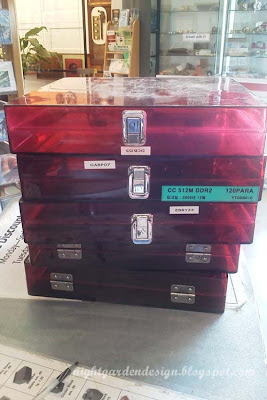 More chairs! I know. I'm seeking help. Fact is, two blogs I regularly visit had featured egg-shaped 1970s wicker chairs (here and here) recently; they're coming back into style. I went back to get one (for the backyard, maybe?) after spending the afternoon thinking it over, and both were sold. At $12.50 apiece, I knew they wouldn't last. 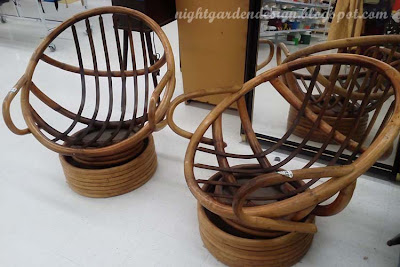 I don't collect Pyrex, but I know a lot of people do. I considered buying it for my Etsy vintage shop. This peachy one was sweet, but honestly, glass and dishware don't sell particularly well in my shop, so I passed on this until I clear a couple more items from my inventory. 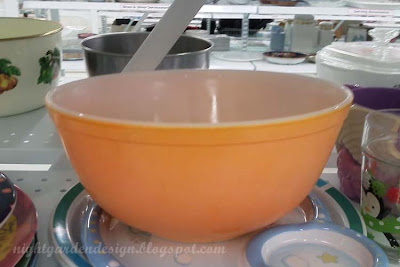 Blue portable record player. Love it. No personal use for it. A little too pricey to ship. So it stayed on the shelf for another 24-hours (tops), until someone whisked it away to a new home. 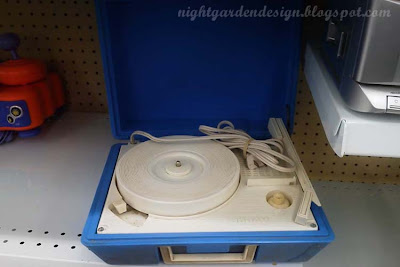 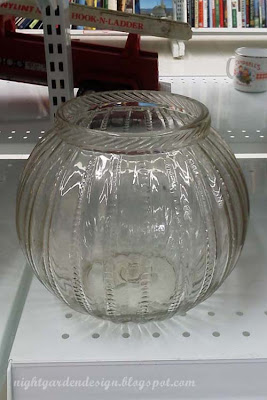 1970s electric organ. I thought it was cute and it reminded me of the one our neighbors had when we were kids. But I'm holding out for a real piano. I still regret not snapping up the one I showed you earlier, and having this would in no way make up for it. 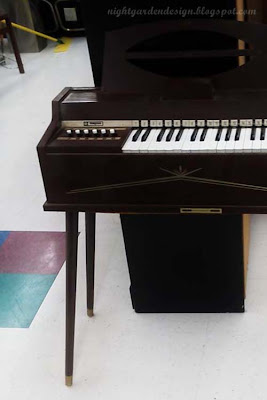 Finally, these. These huge, light-up letters from an old Pepsi-Cola bottling company sign. There are two "P"s in Pepsi. There was one in a (claimed) shopping cart at the front of the store, along with the "s" (the "a" was already gone). If I'd been there awhile earlier, I could have found the first letter of each of our names. As it was, the only three left weren't useful; once again, saved by the bell. 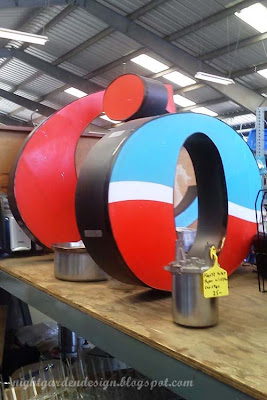 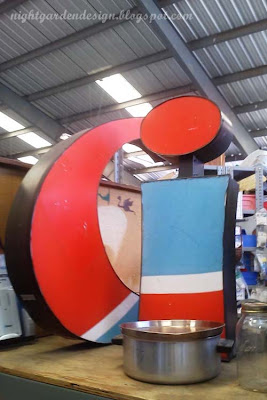 So there you have it! A ton of great secondhand finds I left behind. Which isn't to say I didn't bring home some nifty things recently. I totally did. But I'm gonna save those for another day.

How about you? What have you been finding and leaving behind?

p.s. you can make these photos larger just by clicking on them, but you probably already knew that!

Great finds and *almost* purchases. I love that piano. It must have been hard to walk away from that.

I have a query in the forums, but no one has answered yet. I'm glad you were able to work around, though!

The piano was a heartbreak, for sure.

I'm always lamenting the ones that got away. They are are definitely more painful if you don't have pictures. If you get a photo it's almost like you bought it. Easier to find space for too. Good call! Oh, the joys of thrifting! There are just so many must have items out there. The coolness never ends. Hope you will stop over and visit me at Quirky Vistas!
Liz

I think some of those things would have been hard to leave behind- especially the egg chairs but I totally agree, you have to be selective with buys or you'd end up filling your home to the brim with stuff.