Update: voting for "So You Think You're Crafty" is completed for the week (as of today, January 11th) and I've made it through to the next round!

Thank you all for your votes, and please check back; I'll have a full tutorial for my project up within the next few days. Woohoo!


I found this great steel box with a sliding lid out at Bring awhile back ($4) and have had it sitting in my carport on top of a set of lockers for a couple of months now. 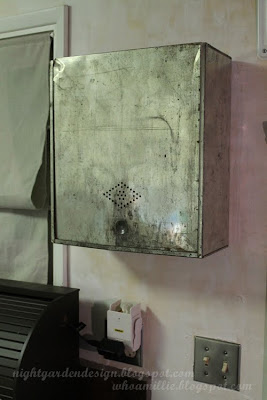 Finally, right before Christmas, when we were expecting house guests and I was trying to get things just a smidgeon organized, I went out and cleaned it up and decided to finally hang it on the wall like I'd intended to do since finding it. Its purpose: to hold cleaning supplies and the kitchen fire extinguisher.

I don't know what purpose it served in its previous life, though it looks to be from the first half of the 20th century. I thought at first it might be a flammable liquids storage box, except the vent on the front (or top, depending on how it originally sat) wouldn't make much sense. 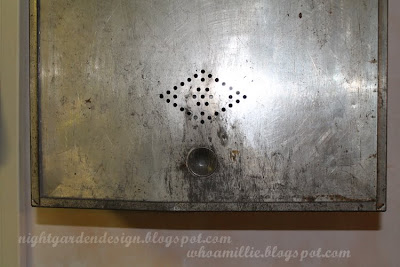 My sister-in-law suggested that it might have been a bread box, which would make sense. Maybe one that stored inside a drawer or something? The sliding lid could still have functioned that way.

At any rate, there were no holes or hangers on the back, and a note (written in marker on bright pink paper) attached to the side (with masking tape) read, "curtains to mend". Not that those two clues narrow it down much. 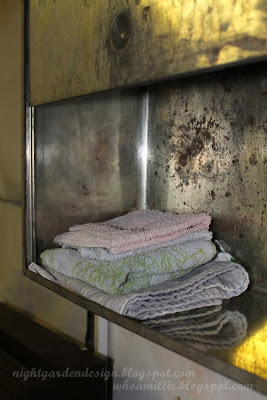 I admit it: I drilled holes in the back and tried hanging it with picture hangers, but that was just a temporary fix and was really unstable; it needed to be hung with drywall anchors, screws, and washers. I'd normally woman-up and do it myself, but I didn't want to brave the shed right now to find the drill. When the mister offered to take care of it for me, I let him.

I always like the character that beat-up old things add to the house. And it inspired me to put in a little more time priming the kitchen walls, so hey, double points for me!

So: what fun old stuff are you bringing into the house these days? Anyone getting any eye rolls? The mister is a master of hiding his, if he's rolling them at all. He's a good guy.


Updated to add: Yup! Bread box for a cabinet drawer!

Posted by Night Garden Design at 1:17 AM

I LOVE your steel storage box! I've been keeping an eye out for a vintage First Aid kit, but a box like this would work perfectly, too! Great find :-)

If I happen across a vintage first aid box in my travels, I'll send you an e-mail, Sheila. By coincidence, I DID find another steel storage box, similar to the first one, THIS VERY AFTERNOON! Synchronicity? I think so.

What a great find. I would love to come to your house and just look around. You have such interesting things.

Great use of your steel box! I too wonder if it was a bread box?? Love it!

Great use of your steel box! It looks to me too as though it was originally a bread box. Sweet find!

Very cool find! I love the industrial style and I can think of so many uses for it! Love your blog -- now following. :)

This box belong to a Hoosier or Napanee style kitchen cupboard. I believe this was used to store potatoes or onions.

My mother, 95, recently passed away and we found a box just like this in a bottom kitchen drawer. Potatoes?

That is extremely cool!

Have a Daily Cup of Mrs. Olson said...

Hi, saw you at Junkin Joes. Love this piece! Would love to find something similar.
Hugs,
Jann

Hi,
I have an old hoosier cupboard with the same steel box and you are correct, it fits into a drawer (mine is the bottom one) of the cabinet. It is for bread. It looks cute hanging on the wall, I love repurposing items!