This is the premise of the video game, Fix-It Felix Jr.:
Ralph owns some land. Citing Imminent Domain, the Nicelanders forcibly move Ralph from his land and into a garbage dump in order to build an apartment building. Ralph objects. He gets angry and vows to tear down the building, but everything he breaks, Fix-It Felix Jr. fixes with his dad's magic golden hammer.

So really, Wreck-It Ralph is the underdog. The premise of the movie, Wreck-It Ralph (upon which we designed our costumes this year) is that Ralph gets tired of not being appreciated for doing his job for thirty years. Felix gets all the medals and friendship; Ralph still lives friendless in the dump. So he ventures out into the hub to find a video game in which he can win a medal of his own . . . and the respect of the Nicelanders.

The Mr. was Wreck-It Ralph this year, to go alongside the kiddo's Fix-It Felix.

We spiked his hair with some red Spirit Gel by Zach's Wax. It has really good hold, and doesn't smear if you hit it with a hair dryer before going out. 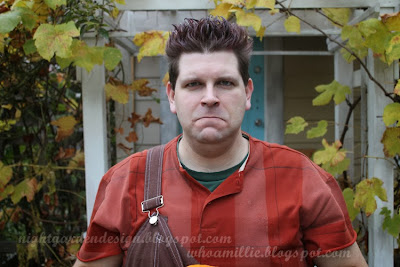 The shirt is a burnt orange polo shirt from Value Village ($3) with the collar removed and the cuffs torn to match the movie. I painted on the plaid pattern by blocking off horizontal stripes with masking tape and spraying with watered-down brick red acrylic paint (this worked a ton better than that crappy fabric spray I tried on my leggings awhile back).

Once those were dry, I drew in the blue lines using a Crayola fabric marker, then masked off the vertical stripes. I sprayed those with watered-down white acrylic paint, applied thinly enough that the other colors still show through where the colors overlap. We were all pretty pleased with how close it matched Ralph's "real" shirt.

I made the overalls using four yards of flannel and some white thread. 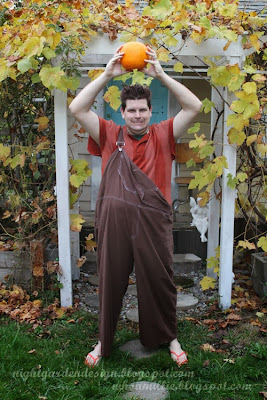 I used a pair of the Mr.'s jeans for a pattern for the bottom, adding a couple of inches to the side of each piece of fabric before cutting. Then I referred to a pair of my kiddo's overalls to determine the shape of the bibs, pockets, and straps and all the lines of stitching. 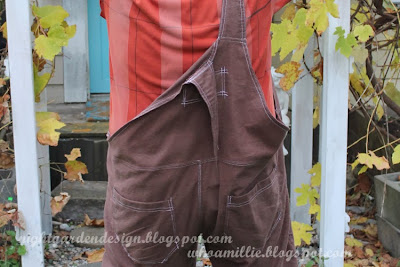 Some metal overall hardware finished them off. Total cost of the overalls was $12.50 with fabric store coupons. 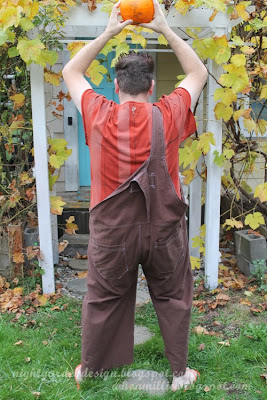 I thought ahead and bought the orange flip-flops in August on clearance. Ralph usually goes barefoot, but Ralph's a cartoon. Real-world peeps wear shoes in October in the PNW.

We also bought a pair of Disney-licensed Wreck-It Ralph Wrecking Fists, but they were a little tight and hard to work in, so they got left behind on Halloween (although they did make an appearance at the preschool party). Don't worry; we bought them on clearance over the summer, so it wasn't as big a waste as if we'd paid what they're going for now on eBay.

I'm hoping to have a photo of the three of us to share soon; I actually finished my Vanellope costume in time, so I'll be going over that in a future post.

Happy November, everyone, and thanks for reading! I hope your Halloween was a smashing success. Pun intended.

(p.s. you can make these photos larger just by clicking on them, but you probably already knew that, clever you.)
Posted by Night Garden Design at 9:56 AM